New, creative and helpful: these are the nominees for the 2017 EQUITANA Innovation Award – Essen 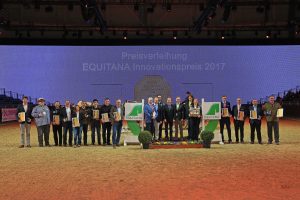 20 Feb 2017
A compact arena leveller with a pusher blade, easily digestible meadows chips, an emergency alarm that automatically rings for help after a fall, and an online platform that liaises between horsebox hire services and customers: In all, 58 ideas and products made it to the next round of the 2017 EQUITANA Innovation Award. The award will be presented in cooperation with the German equestrian business magazine PFERDEBETRIEB on 21 March 2017, at the world’s leading trade fair in equestrian sports in Essen from 18 to 26 March.

Nearly 90 submissions have been recorded this year. Interest was particularly high in the Fodder category, which received 20 submissions. Another popular category was a new one: Horse Equipment and Training Technology (13 submissions). It was followed by Vehicles and Trailers (12 submissions) and then Pasture/Stable Technology and Accessories (11 submissions). For the first time exhibitors could apply for awards in Feeding and Trough Technology and in Sustainability/CSR. Nominations were open to products that were less than 12 months old and which improved the efficiency, operational safety, energy situation or service portfolio at an equestrian enterprise or which were new developments on the equestrian sports market.

Festive award ceremony
The biggest highlights of the trade fair programme will take place at EQUITANA’s large arena, the Grosse Ring in Hall 6, with space for an audience of up to 5,000. This will be an appropriate setting for the festive ceremony of the 2017 EQUITANA Innovation Award, scheduled for 21 March. Awards will cover nine categories and, if appropriate, a further category – in the form of a Special Jury Award. They will be presented by EQUITANA and the German equestrian business magazine PFERDEBETRIEB.
About the EQUITANA Innovation Award